We look forward to helping you reach your highest level of health. 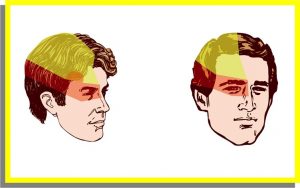 Do you have migraines or know somebody who has migraines?

Migraines can be triggered by:

We have treated many, many clients who have migraines over the years and I do not remember any of them who did not benefit in some way.

Initially we suggest twice per week Acupuncture treatments, then decrease to weekly, eventually to every other week, then monthly. We have evaluations to monitor their progress and adjust our treatment frequency recommendations accordingly.

If the migraines occur around the menstrual cycle often one treatment just before the cycle and one during the first one or two days of the cycle have shown to be very effective.

Usually any or all of the following migraine parameters improve:

Frequency: For example if the client had them initially x1-2 per week, after a number of treatments they may have them one to three times per month.

Time: Initially their migraines might last 1-2 days, and after a number of treatments they might last a few hours to a half day.

Medication: Initially they may take prescription medications, after a number of treatments they are able to manage their migraines with over the counter medications and may report that those are actually more effective than the stronger medications were in the past.

Acupuncture can treat an acute Migraine

Acupuncture can also be effective not only in preventing but also in at treating a very severe migraine. One of our clients had gone to the Emergency Room three times in two months for their migraines. While the medications were helpful, these visits were expensive and stressful for our client.

Their migraine was significantly better right after their treatment and they managed without another Emergency Room visit and were able to return to work the next day!

Acupressure Point which can help Migraines 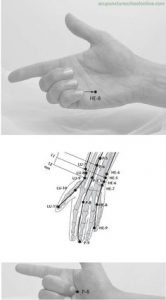 This Acupressure Point can help Migraines

One great Acupressure point which can help migraines is called Heart 8. It is on the palm side of the hand between the bones of the pinkie and the ring finger. Feel for the depression which the “V” those bones create inside the palm. It is best to use the thumb and index finger to squeeze this area firmly, by pressing the opposing area on the back side of the hand and on the palm side of the hand. Try pressing this area on either hand, if it feels tender to touch, it is the correct area, but press in the depression, not on top of a bone.

Learn more about which other conditions Acupuncture can treat here.